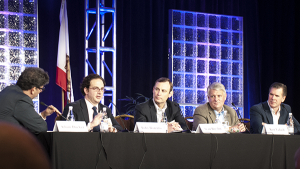 Palm Springs, Calif.—Pop quiz. With more than 104 million people living in apartments in the United States, who exactly should we be developing for?

Sure, the easy answer is Millennials and Boomers. But those are some large brush strokes, according to a panel at the NMHC Apartment Strategies Outlook Conference in Palm Springs.

Though we’ve been hearing about the oncoming wave of Boomer renters for years, Millennials have been the moving force behind occupancy and rent gains. But perhaps it’s time to stop thinking about building for two separate groups. Instead we could be building for “youthful urban socials,” as Sean Breslin, COO of AvalonBay Communities, referred to those targeted by his firm’s AVA brand. “Sure, some of that translates to Millennials, but only about 50 percent of AVA residents are under 29.”

Yes, the AVA brand certainly does target Millennials. Personalization is played up in apartments with chalkboards and flex closet space, and in DIY commons areas like bike shops and pet spas (a.k.a. grooming stations).

The type of boomers looking to rent (unfortunately they often rather choose to buy a condo) in urban areas appreciate many of the same things that young renters do—walkable urban centers with options for food and entertainment. Sure, they have earned the right to that larger unit with the views, but some younger renters want—and can afford—the same thing.

His shop is paying less attention to demographics and putting more of an emphasis on behavioral characteristics to design projects that resonate with residents on an emotional level. The Bozzuto Group has recently turned to advertising agencies and PR firms in the hospitality, nightlife and retail space in order to create properties and marketing materials that are authentic.

Each product has a different customer, and age is not the defining factor. An end goal would be to mimic retail and create products that appeal to both young and young-at-heart renters. Apple, Patagonia and Tesla are some examples of companies with cross-generational customer loyalty. Millennials might want the iPhone 6; Boomers might favor the iPhone 6 Plus.

Ken Valach, CEO of Trammell Crow Residential, said that his firm is taking this approach at Alexan, an 18-story tower being built in the East Village neighborhood of San Diego. Some units on the higher floors are being tailored to empty nesters with larger floor plans that include space for a full-size dinning room table.

“We are really trying to mix it up, so you might see Doug Bibby and the kid with a bunch of tattoos in the elevator,” Valach said, eliciting some chuckles from the audience.

Technology, packages and pets are also important factors to consider for the lifestyle renter regardless of age.

“Cellphones have to work, and sometimes you need a booster for the signal. If their cell doesn’t work, they are not going to renew,” Valach said.

Between 35 and 40 percent of renters in Trammell Crow Residential properties have dogs. Whether you are a pet person or not, making it easy for renters to tend for their pets should be a big focus if you are looking to help them save time—something they are more than willing to pay a premium for.

“These people work hard, and work long hours,” said Scott Wise, executive managing director at Greystar. “Anything you can do to take the noise out of their life means a lot to them, especially in dense areas with a lot of congestions and time between ‘point a’ and ‘point b.’”

Wise added that while Greystar had tried to target the boomer population on a few projects, capital sources proved to be a bit nervous about product with predominantly large rental footprints.