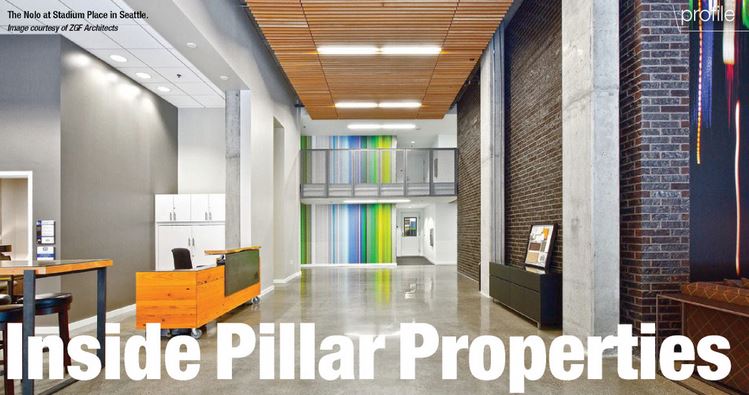 When you’re talking multifamily development in the Puget Sound region, the conversation ultimately begins and endsPillarfeature with Pillar Properties, which has approximately 1,200 multifamily units currently operating, plus another 250 that are actively under construction and another 375 scheduled to break ground in 2015.

Under the leadership of its president Bill Pettit, Pillar Properties has established itself as a leader in the Pacific Northwest for developing, owning and managing apartment buildings that define the region. By its company mantra, Pillar Properties only deals with residences that express the unique personality and vitality of Seattle’s signature neighborhoods.

“We have a saying around here called ‘quietly awesome’ that we use at all levels across all aspects of our business,” says Bill Pettit’s son, Billy Pettit, senior vice president of the company, who was interviewed for this profile. “The concept of ‘quietly awesome’ emerged out of our branding initiative and was initially focused on the experience we wanted to provide for our residential tenants or our residents who are choosing to live in one of our communities. Ultimately that evolved and it now defines our culture and, in general, our approach to multifamily operations within our portfolio.”

Another word the younger Pettit likes to throw around is “localicious,” an admittedly made-up term that expresses Pillar’s desire to being a good neighbor and its approach to creating a sense of community.

“It’s the backbone for all our content marketing initiatives delivered via various social channels, our ratings and reviews,” he says. “It also helps define Pillar Passions, which is our new charitable initiative where we run quarterly campaigns supporting four different nonprofit organizations or charitable organizations that we support each year.”

Pillar Properties is a privately owned company capitalized by the Merrill Family; therefore, it can trace its roots all the way back to 1890, when timber pioneer R.D. Merrill began his first timber operation.

“R.D. Merrill Company still exists and is a holding company with two real estate portfolios: Pillar Properties, a developer, owner and operator of premier multifamily assets in the Puget Sound Region as well as a few other strategic real estate investments,” Pettit says.

“And our sister company Merrill Gardens, which has been around for almost 22 year and at one point was the sixth largest private owner/operator of independent and assisted living in the industry with roughly 71 properties operating in as many as 16 states.”

However, Pillar Properties as known today, has only been around since 2011.

“That said, we started launching the strategy in 2007 and started acquiring or assembling a few sites for planned multifamily development in some of the unique neighborhoods surrounding the downtown core here in Seattle,” Pettit says. “We launched a branding initiative in 2011 that resulted in the naming of the company—Pillar Properties—and really defined who we are today from both a strategic standpoint as well as culture-based initiatives and ultimately an operating strategy.”

Read the rest of the story on Multi-Housing News online.